skip to main | skip to sidebar

Just what we needed right?

It looks like with teen obesity on the rise, we're seeing an increase in teen cholesterol levels too.  It was inevitable. The U.S. Centers for Disease Control and Prevention (CDC) reported on Thursday that one in five American teens has unhealthy cholesterol levels (a major risk factor for heart disease in adults).  Heart disease still remains the leading cause of death in the United States.

What does this mean? More clients for Big Pharma! I bet they're laughing their way to the bank now.  Presently, there are quite a few drugs used to control cholesterol levels in adults - so why not use them for teens too?

Is anyone seeing the trend here? We know that those who are obese have a higher risk of having increased levels of "bad" cholesterol - in turn, putting them at risk of developing heart disease. Doesn't it seem more logical to target the obesity (the cause) than trying to alter the levels (the effect).
I suppose it make sense their way when money is more of a priority than the well-being of our country. 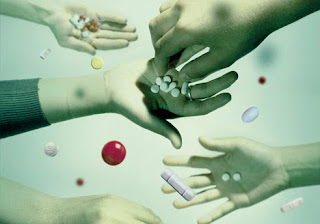